We having been visiting Floyd County Va for over ten years, now.

Though we go every year, we typically only stay the night, so it hasn’t afforded us much opportunity to do much.

That changed last year. Last year, we decided that it would be too expensive to stay a week in Atlanta, for Dragon*con, which we had been doing since 2007. Not vacationing wasn’t really an option, as Ben looks forward to it all year, and doesn’t really do anything else for time off from work.

My anxiety has gotten considerably worse, since 2007, and it also makes enjoying Dragon*con tough, because I don’t ever want to spend more than a couple hours there.

So, due to money, and mental illness, Ben decided to deviate from our traditional plans. We decided to stay a week in Floyd, and one in the OBX.

The main reason I wanted to stay in Floyd was because every year we leave, they are setting up for an enormous flea market bazaar, over Labor Day Weekend. I wasn’t sure even being able to go was an option, due to the anxiety, so Ben suggested we should try it, and bring Gaius, my ESA.

It was the first time we had ever brought a pet on vacation with us, so I wasn’t positive it was going to be any less stressful.

Miraculously, Gaius is the most well behaved cat ever. He never fussed, or had any accidents the whole trip.

So, when we decided to try to take him to the Hillsville Flea Market Days, I thought it would be okay.

It was an incredibly hot day, and the place was way more crowded than I was comfortable with. We did show up really early, to beat the crowds and heat. That was a good idea, but the place just had so many booths. Still, we didn’t ever get to half of them.

Gaius wouldn’t walk on his leash, so I did end up carrying him, the entire time. He’s not super heavy, but after a few hours, its a bit much.

Everyone loved Gaius, commented on his size, his beauty, his coat. More than that, everyone kept touching him, just walked right up and petted him.

Okay, that bugged me. Not just because no one asked, or because it was like everyone coming over to me to touch me, but — never NEVER touch an animal you aren’t familiar with, you put yourself and the animal in unnecessary risk.

He was mostly amazing though, until we hit the Lego table.

Gaius loves Lego Minifigures, and this table was filled with them. He -suddenly- wanted to get down and play, but of course he couldn’t, really. After a few minutes of that, he expressed his unhappiness, vocally, and I got away from the table to the booth across the way.

The booth had nothing interesting at it, that I could see, but it had shade, and I spotted a few tin types in a glass case.

I asked the man about them, and he had wanted some absurd price. I settled with Gaius and waited for Ben to come back. In the meantime, though, the attendant had asked me if I liked old photos, to which I replied “Yes”.

So, he went back in his vehicle and started pulling out banana box after banana box. I wasn’t really paying him much attention, at that point.

Finally, Ben finishes with the Legos and comes over, at which point we start to leave.

The man at the booth inquires if I am going to look at the boxes of photos he just got out, so I do, letting Ben handle the cat for a bit.

I ended up spending $50 for 42 cabinet cards, 4 tintypes, and one wet plate photo. I still think I got a solid deal, and estimated the man could have made several hundred dollars if he sold them individually.

Still, I was glad he sold them to me, and that all the events of the day led me to that booth, at that time.

This is one of the Cabinet cards I acquired, then. 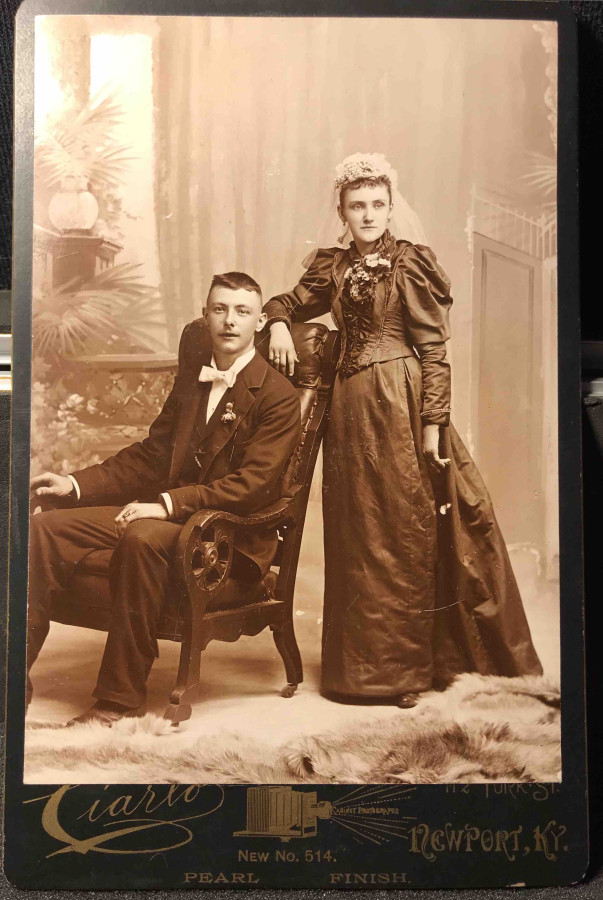